Continuing the DwD exploration of policy futures, in April we explored probable and desired near future political landscapes facing Toronto and Ontario in the impending election. As with the 2017 DwD series on a People’s Design Brief for Canadian foreign policy, we hosted a dialogue to co-create new narratives for an emerging political concern. In hosting a dialogue, our aim is to frame the issues from a citizen perspective and to explore possible actions and positions with the potential to advise agendas with alternative policy options, using creative foresight to play with various proposals, horizons, and attitudes for political change.

The session was structured to explore several questions of potential interest.

While we had several civil servants in the room, we did not have experienced politicians – mainly activists and innovators. I understand it can be challenging for any truly mixed group of participants to explore their ideas and preferences for political agendas, for issues of choice. A key skill we discussed, but did not practice directly, is that of crafting polemics, or personal arguments reasoned from one’s values and individual observations. I submit that these positions, expressed in public participation events with authenticity, are our most powerful political tools.

With issues ranging from regional climate change planning, indigenous land restoration, mental health support, anti-war, or national economic policies, the personally-held vision for action can be heard as strong as position statements espoused by politicians and vested interests, because as citizens we influence and affect other people “like us.” Yet we rarely work on honing these ideas in earnest in preparation for sincere action. Therefore we might say the value proposition for the DwD session was to open up our capacity for engaging in craft politics to propose agendas in our local and regional change contexts.

What is the meaning of “craft politics?” If retail politics are when politicians cruise community events and mix it up with the people they represent, in personal face to face interactions, then craft politics proposes a home brew, hand-made movement starting with local concerns, a problem or agenda that you, personally, authentically want to address. If you believe you have skin in the game (as for real, c.f. Taleb) and can be a committed first mover for change, your fresh voice can make all the difference.

This is what Flores, Dreyfus and Spinoza advocate in Disclosing New Worlds, their 20 year old book on democratic action as interpretive speaking. They demonstrate how democratic action is a type of entrepreneurship, wherein committed participants in society (SITG) pick up on anomalies and disharmonies in experience – and then create new articulations of possibility, in conversations of possibility, that prompt people to action. They talk about “retrieve a sensitivity to our history-making skills, and a sensitivity to details, but in particular, to disharmonies and anomalies.” That we develop skills for these speech acts and thereby develop a style for action. We are at our best, they say, when “we become sensitive to anomalies that enable us to change the style of our culture” 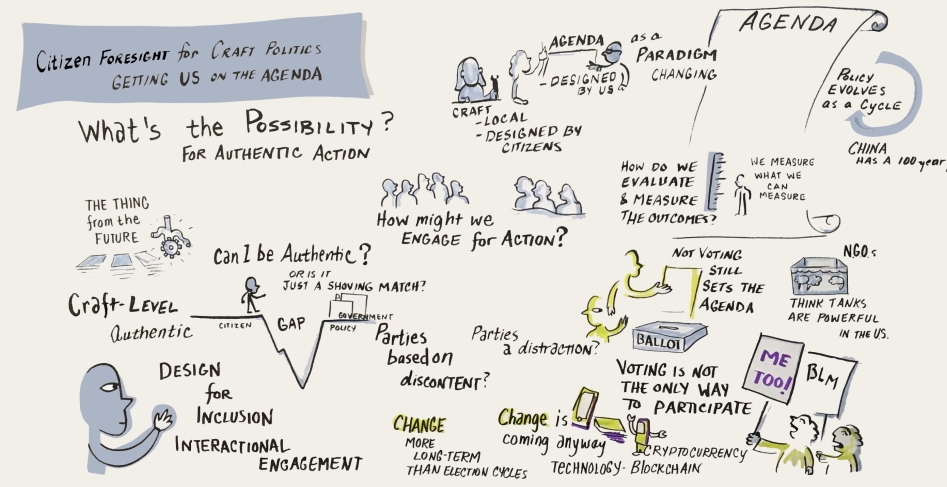 Thanks to Patricia K again for sketching the conversation in the opening dialogue. Several trends and themes were discussed:

Thing From the Future
The Thing From the Future card game provokes dialogue about the possibility, prevalence, and meaning of possible futures. We used the new (beta) version from the Situation Lab, thanks to our friend former SFI professor Stuart Candy – who heard of the DwD on his list and provided us an advance copy of the new deck.  The idea of The Thing From the Future is that we are creating an object from a period in the future where a situation has emerged, through an object with a purpose or representation of that future, in a context that has meaning for our future choice-making. We were among the first to use the new deck (seen below) that constructs a brief narratives by random cards thrown from a round of hands played from a set of 10 each. 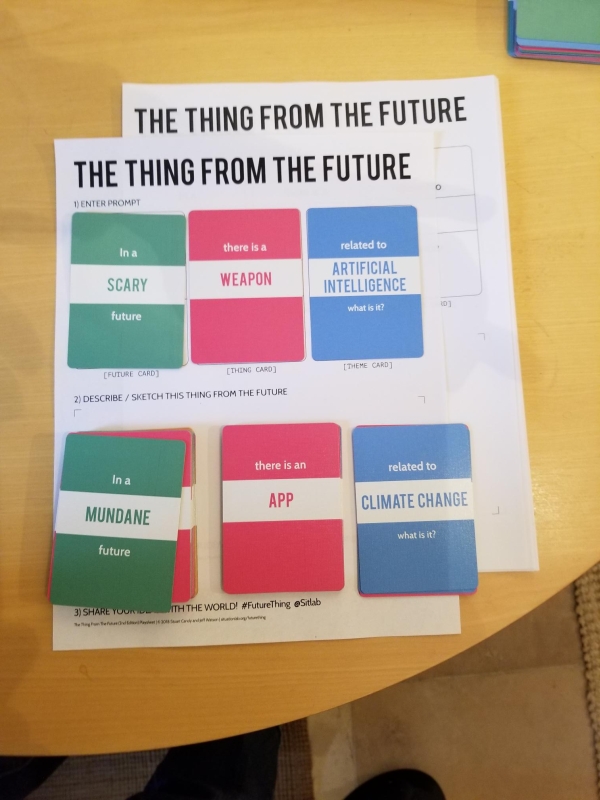 Groups of 3-4 worked at tables to construct Things from the Future using the cards to relate them to an outcome – to some extent – of a political agenda. As shown here, one table formed (without gaming it) a narrative of “There is a Scary Future where a Weapon is related to Artificial Intelligence.” While every table discussed their constructs, this issue elicited a good 15 minutes of discussion – which may be unbalanced in dialogue, but the emergence of such hot encounters in the apparently random card throws is kind of the purpose. Across the tables we also saw constructs like the one below, where “In a Mundane future there is an App related to Climate Change.” Which is highly probable, and rather sad.