January’s DwD hosted an interactive installation in OCAD’s main lobby, a space for encountering random and performed noise and meaning. Juxtaposed with the greatly-anticipated talks of Nick Cave and Ebony Patterson happening in the auditorium at the same time, our living installation offered a vibrant invitation to visitors in Toronto’s art community that were unable to snag a seat in the sold out event up the hall. Itch performed the entire time, as a dialogue in the exploration” of sound co-creation through four turntables and a stack of colour-coded LPs.

Noise musician and artist Mike Hansen presents a participatory arts engagement to these questions through anecdotal, observational and performative means.

“We encounter a cacophony through a hands-on approach to the cacophony’s manufacture through improvisation. Ear to Hand – Audience to Performer by participating in Itch, an installation/performance. Itch creates a context for inquiry, a hands-on sound work that invites participants to improvise as turntablists in conversation with each other.”

Performed in a quartet with an individual as a conductor, Itch meets the need (or desire) to interact as well as to create a spontaneous improvisational dialogue with the noise/sound/music, audience/musicians and environment.  The audience/performers become the DJs, demystifying the accepted DJ role. Itch opens the door to allow non-professionals to see, feel and fully experience the mechanics of improvisation and noisemaking in a musical context. 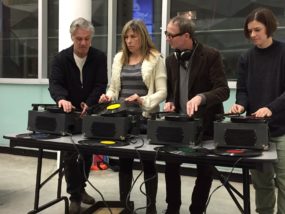 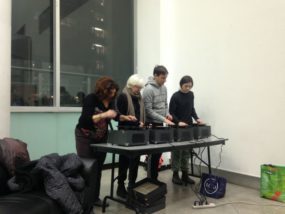 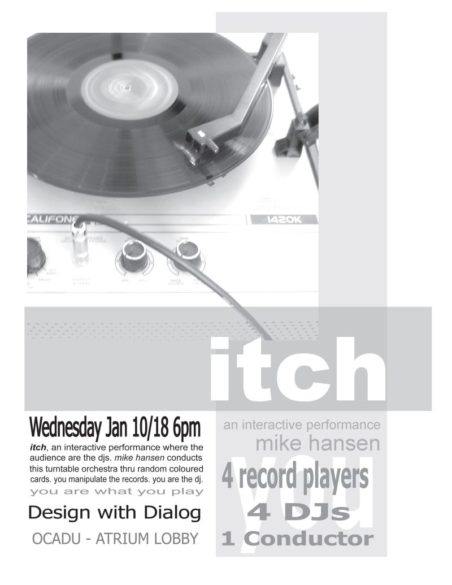 My practice researches noise and it’s ever evolving meaning.

Noise can be defined as what it isn’t, generating a negative stereotype. I see noise as an invitation, not a disturbance. My continuing research of noise has reinforced my belief that noise is the genesis of all sound. What maybe noise at one time may not be noise today. A clear example is the electric guitar. When first invented it was heard as noise, today it is referred to as musical, an accepted instrument in the context of music making. The idea and definition of noise is ever changing and my works solidify that notion.

My works are sound-based, and  include participatory installations, (which also stand on their own), sculptures and installations, single and multiple channel video and/or objects that may include drawings, painting and photography.

Noise/sound plays the lead in my practice as both artist and musician. I believe noise to be a multi-faceted tool, through participants creating the noise or using time-based imagery that relates to noise as well as an object that reflect noise. The recontextualisation of noise is a relationship that is displayed via my works. Most of the works use images to amplify the meaning of the sound.

The eye weighs heavy in the visual arts but sound is the greatest affectual component in my work.