DwD often hosts more open-ended, playful learning workshops in the summer months. For August we hosted Dexter Ico, well known as a video coach, with his Alpha Expression workshop. The experience we explored together:
Can we be self-expressed on demand?

The promise: Discover your capacity to be yourself with others, on stage, on camera, on demand.

Dexter Ico has been coaching people from all walks of life to hold presence in unnerving situatins – the stage and video camera in particular – working with stand-up comedy, theatre, improve, and vlogging to gain presence and assurance. Earlier developments of his workshop were known as “Practice makes Practice.” Join Dexter and Design with Dialogue in this August session to safely explore the range and experience of you ability to hold presence with grace and focus, pushing the ranges of vocal and physical expression to learn from touching these boundaries in a safe environment. Dexter calls this form of over-acting the “alpha expression.”

Exercises were descriptively named following the impulse being explored. The following photos of community members show “Exaggerated Alpha” and some from “Expert Voice.” 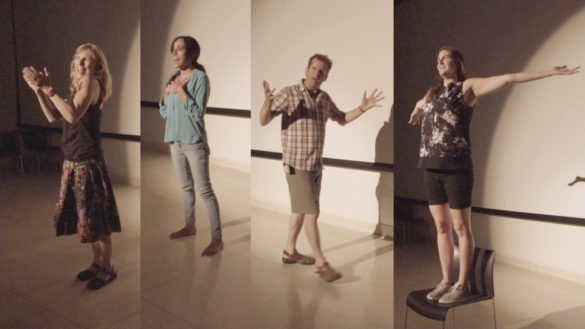 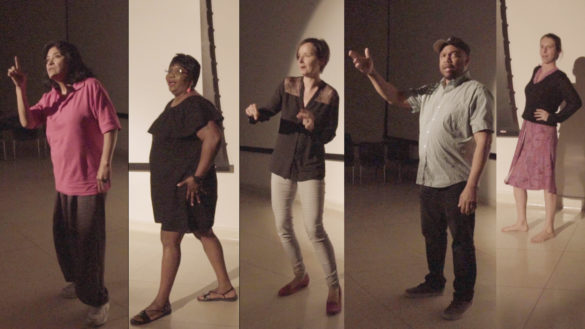 Many of us stage-shy, hyper-rational, modestly-composed speakers learned how to swing out and push the edges of self-expression and speech performance in the workshop. Of course, as only a 2.5 hour workshop there was only so much direct coaching available for the over 20 participants in the OCADU Auditorium. This was a first experience for many of this opportunity and even at that initial stage, was experienced as a personal breakthrough by many.

ABOUT THE GUEST HOST
My name is Dexter Ico. I have a knack for coaching people. I’ve helped kids to CEO’s, actors land TV shows, and held one-off talk shows. As a video producer, I interview and direct people all the time, encouraging the expression of that intuitive alpha in everyone. 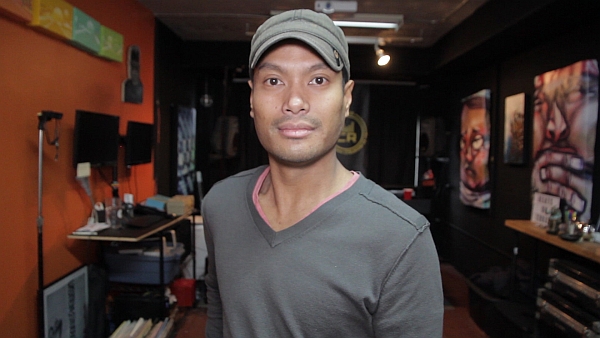 “The Alpha is being yourself to an extreme, in your essence, wanting to engage with others, like children do.  It’s about empowering who you already are through playful exercises and interactive dialogue. The key component? A sense of play.”