Design with Dialogue held a series of dialogues and design sessions to construct a shared ethical vision and narrative characterizing the emerging commitments and proposals envisioning a new Canadian foreign policy. Across the perspectives of a wide variety of citizens and residents, ages and sectors, ethnicities and spiritual traditions, a growing group of DwD members started to define a foundation for agreement on principles and proposals that might guide a new Canadian values orientation to policies affecting our relationships with other nations and cultures in this single shared planet.

The consensus of the group meeting across successive sessions was that the topic was urgent and necessary to develop with further inquiry. To instigate dialogue we have embraced a series of motivating questions including:

The workshops yielded a collective challenge map expressing a wide variety of perspectives, a system map structured by influence and relationship to their moral weight on other issues in the problematique (the relations of the challenge map). 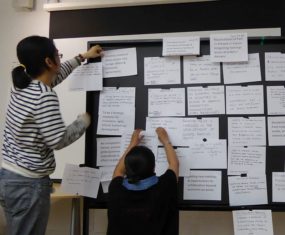 The session was a continuation of our Canadian peace series with a dialogue to co-create foreign policy principles and proposals. Today the spheres of national security and foreign policy are held closely by government and decisions are made based on undisclosed interests and unknown expected outcomes. In a democratic society, we can state our claims on policy input, even if government secrecy holds sway in decision making.

As citizens we might exercise our option to participate in defining people’s interests in foreign affairs, which ought to be as much a domain for grassroots citizen participation as indigenous affairs, labour relations, healthcare, or education. Perhaps even more, since misguided foreign relations disrupt the futures of our families and children and relationships with other cultures. The outcomes of bad policy choices, as seen in similar societies to ours (US, UK), leads to institutionalized racism and participation in war making and profiteering. In this session we will continue and complete discussions leading toward an outline or draft of a citizen’s policy brief. Possible outcomes could include: 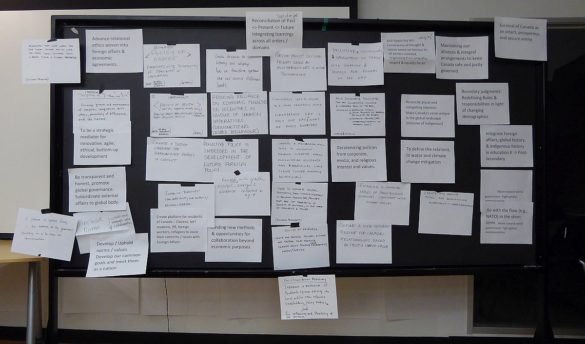 Foreign policy is as much a domain for grassroots citizen participation as indigenous affairs, labour relations, healthcare, or education. Perhaps even more, since bad foreign relations decisions disrupt the futures of our families and children and relationships with other cultures. In this session we will construct (an outline or draft) a citizen’s policy brief following dialogic design principles.

We closed by defining actions and possible outcomes consistent with participant proposals. We have since engaged in editorial writing and citizen participation in hearings, forming alliances with other grassroots groups concerned with decolonizing foreign policy, and sponsoring a continuing dialogue series on the issues.