Every year a group of DwD facilitators and stewards (community volunteers who curate sessions) meet for a year-end retreat. We celebrate and appreciate the learning and accomplishment of the year and have an inquiry toward planning for the next year.  Among the dreams and possibilities we considered for 2017 were:

Dreams from the Retreat

The Agoras model of staging from “Lab” to the field of stakeholders has relevance in the current proliferation of social innovation labs, as the lab concept has been employed ubiquitously and metaphorically. There’s little evidence of external impact in terms of higher quality programs and stakeholder services that would not have been done without the labs. They are often small developmental teams using facilitative approaches that work with policy or startup organizations. Given that the SFI MDes program trains people for leading in such roles, we need to consider whether there are more or less effective models of “lab work.”
Christakis and Warfield developed an approach 20+ years ago for the developmental evaluation of social science innovations in stakeholder applications, as a reference for SDD. Known as the Domain of Science Model, it shows that the “Lab” is the initial, most tentative stage in a series of four domains that are needed to develop an evidence-based social innovation. The stages are summarized in the following model: 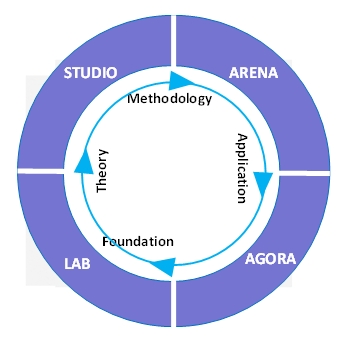 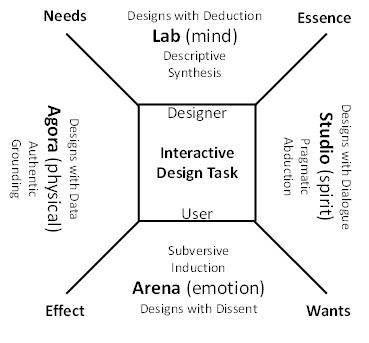 Peter Pennefather shared a sketch of his extension to this model after the retreat, in the following diagram. His contributions adds several new dimensions, such as the dominant logic/reasoning process in each stage, the transformation of public goods (from need to effect) and the inclusion of the design process that’s central to DwD.