Design with Dialogue hosted Alexander “Aleco” Christakis and Maria Kakoulaki for a public workshop on the renewal of civic engagement through place-based dialogues. Aleco, author of “How People Harness their Collective Wisdom” (with Kenneth Bausch, 2006) was in Toronto as one of the keynote speakers at RSD5 Relating Systems Thinking and Design and their availability

Aleco and Maria shared their work from the Demoscopio project established with the mayor of the municipality Heraklion, Crete, which represents an emerging centre of civic innovation co-create and self-organized by citizen collaboration.  His RSD Keynote talk is on Demoscopio Culture: How do we empower and liberate citizen’s voices in designing their own social systems?

The session started with a brief story about the Demoscopio and discussion of the distinctions of  the Agora, the Arena, and the Lab. The dialogue shifted to our communities as committed stakeholders in the co-creation of place-based democratic centres for critical and creative citizen engagement.  Further questions were explored relevant to the RSD keynote, including: 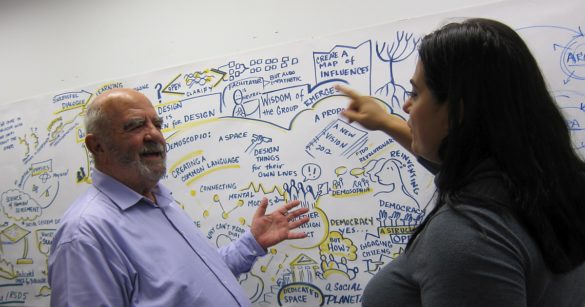 The workshop followed the typical Design with Dialogue process of a circle introduction and discussion, a challenge for small groups working on their preferred ideas, and a harvest and discussion with the plenary to complete the cycle.

The live sketch harvest presents some of the core ideas of the Demoscopio project discussed by Aleco and Maria.  From the left, this starts with the history of social system design and the development of systems of dialogue for engaging people from all walks of life to propose better futures and address their concerns in civil discourse.  Proceeding to the right of the harvest, the story shows the unfolding of the Demoscopio, a proposal to the mayor of Heraklion that has been recently developed as a dedicated civic hub, a place for continuing civic engagement through co-creation. The Demoscopio itself is an evolution of the Social Planetarium as conceived by Harold Laswell, further updated by John Warfield as the Observatorium, and evolved into the societal conference hub proposed by Christakis. 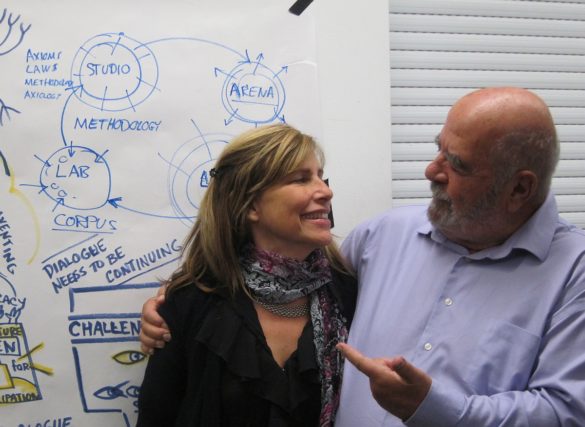 Behind Christakis and Patricia Kambitsch (Playthink, live sketching) we see at the right end of the sketch a drawing of Warfield’s Domain of Science Model is represented (crudely inscribed by Jones) showing the cycle of mutual learning and development from the Corpus (body of theory and scientific observations) to the Practice (the Arena and Agora).  We are changing the Warfield proposition of this cycle in several ways, consistent with systemic design practice. Four contexts identified by place and process are defined:

The cycle of learning is mutually constructed between the scientific base developed in the Lab and developed and published in the Corpus.  Trials, experiments and prototypes of co-creation with invited particpants are held in a Studio setting. Social design work, such as the DwD community of practice, can be developed in the Studio setting in a safe-to-fail environment. The Studio setting is what we might typically think of with the government or social innovation “labs.” In a social science sense, we would reserve the Lab as relevant to a dedicated environment for research and service design by core teams. A university laboratory is not usually a setting for stakeholder co-creation. The design studio setting is a more appropriate fit for creative engagements.

Each group formed a proposal for convening dialogue engagements based on the DOSM / Lab -> Arena cycle. Several cases are shown, based on the emergent concerns identified in the opening dialogue (essentially, responding to “why are you here for this workshop?”)

Stephen, Goran and Peter Pennefather drew up a model for healthcare organizations, titled “How to Care for Health.” Starting in a Lab (e.g. St. Mike’s Hospital) which is developing competencies, managing risk, focused on internal development. The Studio context (OCAD is shown) enables co-creation of prototypes and design for emergence of new capacities. The Arena(s) are defined as spaces for community health partnership, wherein power and systemic relationships can be reconfigured to support civic dialogue. The Agoras are conceived of as spaces for patient engagement. 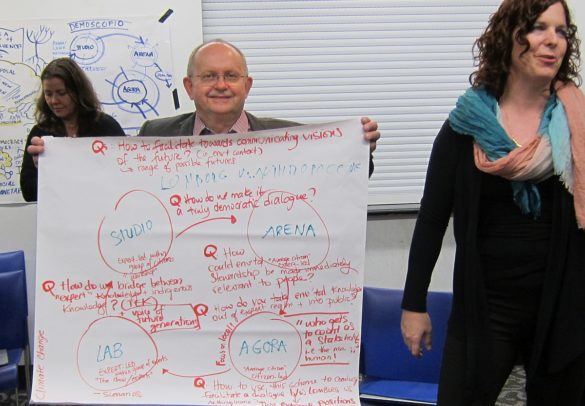 Professor Czeslaw Mesjazc (visiting for RSD5 from UEK, Krakow) holds up their group’s model which Dee narrates as a model for democratic dialogue dealing with significant societal issues, such as the local stewardship of a shared future in the Anthropocene (whether “good” per B. Lomborg, or a “bad” Anthropocene per Clive Hamilton). The Lab is viewed as the expert-led context, researching futures and bridging to the Studio with the question: How do we relate between expert knowledges and indigenous wisdom? From Studio to Arena, they ask “how do we make a truly democratic dialogue” and from Arena to Agora, How might environmental stewardship be made relevant to the people?” 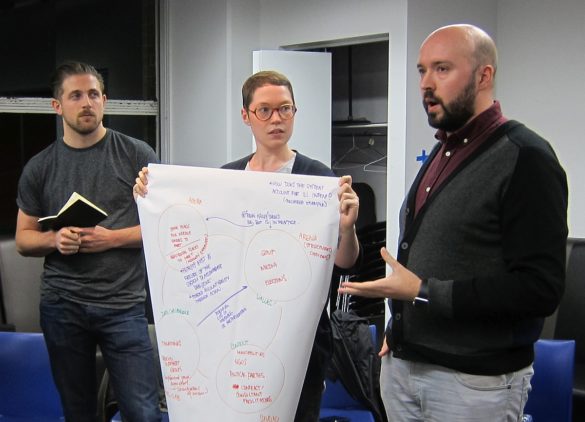 Three other groups developed DOSM models such as Peter Rose’s group above, focusing on democratic practices in society and the failure of electoral process to fully represent citizen choices. 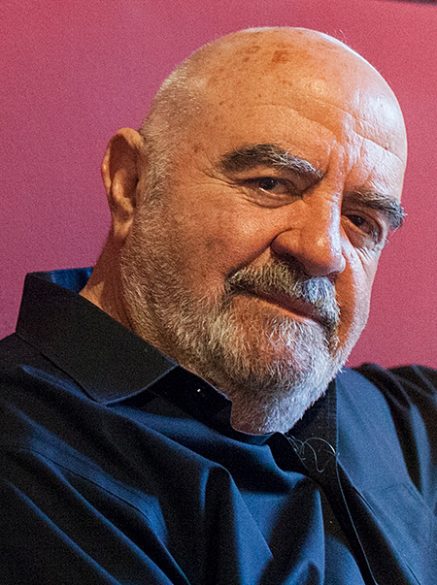 has 40 years experience in developing and testing methods for engaging stakeholders in productive dialogue. In the 1960’s he consulted with Constantinos Doxiadis on the development of Ekistics, the science of settlements, and later conferred with Hasan Özbekhan to advance a methodology for social systems design, associated with the prospectus of the Club of Rome. This process became Interactive Management (as developed with John Warfield) and Structured Dialogic Design.

Aleco is the author of over 100 papers on dialogic design science, stakeholder participation, including How People Harness their Collective Wisdom and Power to Create the Future. He is founder of the Institute for 21st Century Agoras and past President of the International Society for the Systems Sciences (2002). He is member of the Board of the Americans for Indian Opportunity (AIO), Advisor to the AIO and a advisor to the Ambassador’s leadership program for engaging tribal leaders from the USA and internationally. He travels across the globe to facilitate structured dialogues and promote the science of dialogic design.