So, ” how DO you change the culture around here?” July’s DwD brought Liz Rykert of Meta Strategies together with the DwD community for an exploration of Liberating Structures, a powerful set of 33 self-organizing group engagement and process change methods. The goal of the session was for all participants to learn and acquire initial experience in LS methods, for productively and playfully changing their conventional patterns of engagement. With a focus on Organizational Culture Change, Liz’s session employed a series of introductory methods for group learning of several of these ready-to-hand tools, all of which are powerful exercises for creating knowledge through relationships and convening explorations:

Liberating Structures are well-known in organizational development and change work for helping to equalize input, access hidden creativity and insights and breakdown the barriers to full participation for everyone. A live sketch (thanks to Patricia at playthink) reveals the course of the evening’s program, from the compelling interest in organizational change, to the processes and principles of Liberating Structures, to the attitudes of engaged facilitation in the practice. Liz’ slides from the workshop are also available online.

One often hears how “we need to change the culture around here.” But changing the culture can feel particularly ephemeral and hard to pin down. The session explored how the patterns of relating contribute to the culture we co-create together in the groups and communities where we work and live. Liz turned the discussion toward the “ghosts” in culture, the patterns and attractors and understand how shifting up our behaviours and actions contribute to the outcomes. A mix of physical and movement exercises, brief dialogues, and guided explorations modeled the approach toward mixing methods within a well-planned workshop. A handout summarizing the assembled collection of best-known LS methods (Matchmaker) is also available online. 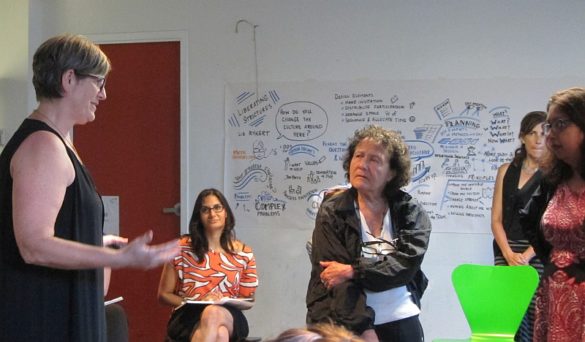 Liz worked dozens of stories and examples into an engaging learning experience. References to organizational studies (Edgar Schein’s Org Culture and Humble Inquiry), complexity theory (Kaufmann and Snowden, Chaos,-Complexity-Bifurcation), and organizational development (Harrison Owen’s Open Space, Appreciative Inquiry) were integrated and sprinkled throughout the session, allowing for connecting the ready-to-use LS methods to larger theoretical constructs from which most of these were originally developed. 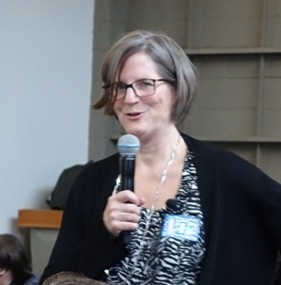 Liz Rykert is the President of Meta Strategies which she founded in 1997. It is a strategy group working in complex organizational change and technology. Meta Strategies delivers on: Change work including innovation, culture change, large system transformation, coaching and facilitation; Web work including strategy, online community, website design and programming; and Network strategy, development, visualization.  She is an active practitioner and coach of methods such as Liberating Structures. She practices Developmental Evaluation on the often uncertain and emergent qualities of projects she works on. Liz has a knack for uncovering new ideas and bringing them to life for the benefit of everyone.

Coincident with the recent DwD, a Plexus Institute newsletter just recounted an extraordinary story of Liz’ role in organizing support for Syrian refugees in Canada. The following post is referenced from this newsletter (otherwise not available online):

When Liz Rykert was working as a consultant a hospital in Oswego, New York, she and colleagues visited the Safe Haven Holocaust Refugee Shelter Museum, which preserves the memories of nearly 1,000 European refugees rescued from the Nazis in World War II and housed in what was then the Fort Ontario Army barracks. She also learned of the work of Ruth Gruber, the woman whose book Haven describes the harrowing work of getting the refugees from war zones to a military ship for transport to the U.S. and safety.

Rykert and her husband, John Sewell, who had accompanied her, thought of what refugees endure: dangers and hardships, loss of their worldly goods and comforts, fear of the future, and endless struggle to stay alive keep their children safe. Rykert recalls her husband saying: “We have to do something about Syrian refugees, being displaced by the millions, taking terrible risks.” His reaction was no surprise. Sewell, a life-long activist for progressive causes , was first elected to Toronto City Council in 1969. As Toronto’s Mayor from 1978-1980, he helped facilitate the city’s response to refugees from Vietnam, a grass roots initiative led by Operation Lifeline. Nearly two-thirds of the 60,000 who arrived in Canada settled in the Toronto area.

Rykert and Sewell are part of a group of 21 friends and neighbors sponsoring a refugee family who fled their home in Aleppo, Syrian, fearing for their lives. The family spent two years in emergency quarters in Turkey before their arrival in Canada in March of this year. Omer Suleyman, a cook, his wife, Aliye El Huseyin, a nurse, and their three children, daughters Esra, 13, and Marem, 8, and son Suleyman, 6, are now in an apartment in Toronto, adjusting to new and very different lives. A Toronto Globe and Mail story by Ian Brown describes the family, the sponsors, and their experiences.

As of last February 8,527 Syrian refugees had private Canadian sponsors, an unusual system unmatched elsewhere in the world. Sewell says some 10,000 private groups like the ones he and Rykert helped form have organized to welcome refugees and many are frustrated with national and international bureaucracies that have delayed arrival of their families. Immigrations officials, observing the doors closing to refugees across the world, have been surprised to find Canadian citizens impatient for more to arrive.

The citizen sponsorship groups commit to paying all their family’s expenses for a full year. Sewell explains the groups collect money (his collected some $45,000 and members don’t know amounts of individual contributions), make connections, arrangements, and help meet individual needs. Some sponsors take classes in how to help without smothering, and how to help foster eventual independence. “It’s a brilliant system,” Sewell said. “We find them places to live, find doctors, get their kids into schools, parents into ESL classes, and a network of people gets them into society, all at small expense to the government, which does pay for healthcare.” Rykert explains the groups introduce newcomers to others who speak Arabic, find banks and other businesses where someone speaks Arabic, locate mosques and grocery stores that sell halal meat and other foods they need, find tutors for children who have missed years of schooling, and free language classes for all. While Suleyman and his wife were anxious to find jobs immediately, their sponsors encouraged them to focus on their new language for the sake of more success later.

The couple says many newcomers suffer from dental problems that result from the often-chaotic lives and erratic diets of refugee existence. Canadian health care doesn’t cover dentistry, so they found a friendly dentist who discounts rates treating their family. Sewell recently took the Suleyman youngsters on a downtown outing, where they were delighted with their first escalator ride.

Sponsors benefit a much as the families they help, Sewell observes. “This is extraordinary community building,” he said. “We have gotten to know our neighbors in more ways than we’d have thought. You think you know your neighbors until you start something like this. This expresses the best about being Canadian. We do this.” For the last 120 years, Sewell said, Canada has had immigrants and refugees equaling about one percent of the population annually. “That means we are very adaptable, and very accepting of new people and different cultures,” he said. “That has been our history.”