Where’s the Money? Exploring for Clues.

Does the collective field have anything to tell us about where the money is?

Diana Claire Douglas joined us from Ottawa to share a brief (3 hour) orientation to Systemic Constellation Work, based on Bert Hellinger’s well-established practice for engaging families, organizations, and all types of social systems within the “knowing field” – a multi-dimensional field that is always present and has also evolved over the last 30 plus years. Systemic constellations consider issues, questions and propositions from a very broad, human and universal systemic perspective. It is used for diagnosing and resolving issues, making decisions, experiencing other ways of knowing, gathering collective intelligence, testing propositions, and creating new processes, services and products − for individuals, families, organizations and larger systems such as cities. For participants, the engagement process is highly experiential, felt, and mostly-nonverbal. The constellation process accesses information and energy that is beyond our mental conceptions through participants representing the elements, reporting their bodymind experiences with no interpretation, finding their place in the field, and allowing movements to emerge from the field as the representatives interact. -In the June DwD session 22 participants engaged in an experiential “experiment’ around the intention of discovering the sources and flow of money as a systemic cultural issue shared among people self-selecting to be in the field.

Systemic Constellation Work is a systemic perspective that embraces families and collectives as living systems, with an inner stance of the facilitator being in relation to the “Knowing Field.” SCW holds an extensive body of knowledge including premises, principles and themes based on the understanding that living systems are guided by principles of balance, internal order and exchange. This supports an experiential process and practice that allows for embodied energy and information to be made visible.

After a series of individual and paired constellation exercises that located the sources of money issues within family constellations, a large group process proceeded and evolved into configurations like those in the photographs. In asking the question “Where’s the money?” in two ways “Where’s the money out of need?” and “Where’s the money in the flow?,” the group generated about a dozen different elements to be represented in the field (yang money, alchemical goddess of money, new paradigm money, power, love, sex, purpose, past, future). These were randomly selected by participants and then represented in locations and relationships in a physical mapping of the field. 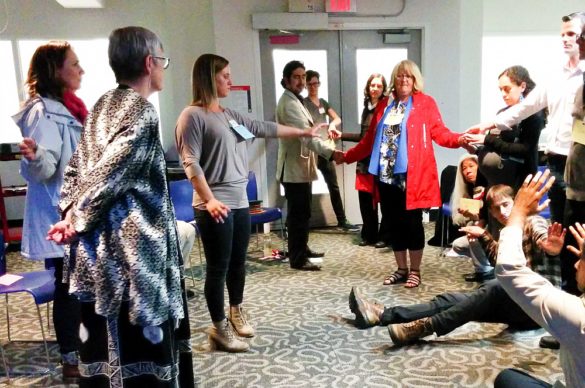 The process is quite dynamic, as particpants move in relationship to re revelation of inquiries within the field. The attitude of response is one of “knowing” and is felt as a response from the representation of an identity or issue in the field (people represented the four dimensions of past, future, above and below – but also selected power,  mystery, “yang money,” love, and the new paradigm of money).    Background presentation on Systemic Constellation Work (1Mb PDF).

For many months now, I have been hearing “where’s the money?” from almost every individual or group involved with (social) innovation. The DwD group seemed a wonderful opportunity to explore what the Knowing Field could show us about where the money is while introducing the systemic constellation work process.

The first three partner exercises allowed participants to experience what it means to be a representative in the knowing field, through exploring their own relationship with money and the impact of knowing why they wanted money. This was working at the personal and family system level. We moved to working at the collective level when doing the whole-group process. The original question “where’s the money?” became two questions: “where’s the money out of need/fear?” and “where’s the money in the flow?” There were a few surprises while we were doing the process: although both yang and yin money were named as elements to be in the constellation, no one chose to represent yin money, so it was not in the field; and in the middle of the constellation an apparent street person lay down across the outside of the window behind the Past.

The process is dynamic, as the representatives move in relationship to each other, revealing what is missing in the field, what is blocking the energy flow, and what needs to be seen, acknowledged and healed before there is flow in the system. This constellation ended when the Past and Future could see each other, when Love and Sex connected, when missing elements (Patriarchy and Family) were added, when Yang money felt it encompassed the whole field, and when almost all the elements were connected in a line from the Past to the Future.
In the short time we had to constellate such a big issue, we saw many movements and elements coming into alignment with each other…each of these planting a seed in our personal consciousness and the collective consciousness that will eventually emerge and show impact in the world. Afterwards, participants often report being more aware of the shifts they saw happening during the constellation — their perception had opened in a new way — and thus are tuned into what is emerging.

Some have called this work “action inquiry in the causal field!”  And I believe there are several further constellations that could be done emerging from this first constellation asking “where’s the money?” For example: what would happen if we did a constellation just with Yin money and did not have Yang money represented? What might we see when both Yin and Yang money are represented in the same process? What would happen if we explored the “who” of Who-has-the-money? New-paradigm money was not able to connect with Who-has-the-money until a missing element was added (patriarchy). As this element was put at the feet of Power, we could use a constellation to unpack the relationship between New-paradigm money, Power, and Patriarchy.

Diana Claire Douglas is a systemic  facilitator, coach and trainer (family, organizational, and social issues), social architect, artist, published author, and explorer of the depths. She is founder of Knowing Field Designs Aligning human systems with Life. She is internationally certified as an Organizational Constellation Work facilitator through the Bert Hellinger Institute of the Netherlands. She is the lead facilitator for systemic constellation work for Integral City and The Hague Centre for Global Governance, Innovation and Emergence, where SCW is used regularly for decision-making, designing creative projects, and team building. She has facilitated constellations at international conferences including INFOSYON conference in Amsterdam, Integral Theory Conference (ITC 2015) in California, and Integral European Conference 2016 in Hungary.  See more at The Knowing Field Issues 19, 22, 26, 27, 28.