When Gelareh Saadatpajouh, Programs Coordinator at Toronto Design Offsite set out to facilitate Design with Dialogue’s TO DO session she decided to have our group explore, as she puts it:

“Design processes, where plurality of indeterminate factors is approached together and in an ongoing manner, and where designers become adept in handling the growing complexity in both materials of their craft and their position in the world.”

Increasingly designers are being called upon to search their souls in order to create with meaning. In a world exhausted by consumer culture and in desperate need of cultural revision we as designers can play a key role. As Gelareh got us up and activated with an exercise where we mimed our way of working it was clear why design thinking is so adaptable across platforms, disciplines and cultures. For as many people as were in the room there was a different design process. As we later shared our revelations from watching each other I realized that my own design process is also adaptable to where I am in my life’s journey and can shift when I have a renewed way of interacting with my world. 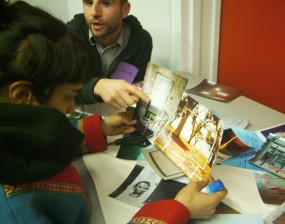 For over a decade my creation happened in isolation. Working with clients to design promotional tools and branding strategy there would be a two-way dialogue with the client after which I would go inside to then create something that would ultimately reach out. After another exercise where we were directed to find a design process action then go out into the group with that action to mingle I realized that my process has radically shifted. Now my first step is to reach out. I start by engaging in multi-directional dialogue, sometimes with other designers, but more often than not those dialogues are with people from many different walks of life. Sometimes those dialogues occur at street corners, even with strangers. I design as I walk, I process as I talk.

More and more I see others who design programs or products, ad campaigns or architecture instinctively, like me, reach out first as the point from which to start. As Design Week in Toronto demonstrated there is a community expanding around the questions “What is design?” and “Can we as designers contribute to modeling a new type of world?”. The idea of the collective is now being understood as the base from which we need to grow ideas. At a time when we require it the most the spirit of collaboration has motivated designers into taking more radical positions. The result –  fertile ground in which we see new materials and new models rapidly sprout.

For the last part of the workshop Gelareh had us break out into small groups “guided by a designer who shared something of their design, resulting in new “artifacts” that were then constructed through brainstorming, creative discussions, and active participation throughout the design process.”

On the street, a few days later, I randomly bumped into someone whose group I was in. I was able to ask her if the exercise we did on her project was helpful to her. Did it result in a new “artifact” for her work? The answer –  an enthusiastic yes! And as we walked up to the street corner together, before going our separate ways, we continued to design as we walked and process as we talked.