Across continents, people in the developed nations have declared a time-out from the economic ravages dealt to Main Street citizens and working families by merely placing their bodies and minds in visible public spaces. Whether  or not you have spent time at St. James or Zuccotti park, the message of this new medium of dissent is clear – people of all ages and walks of life have had enough. The mechanisms given to us to exert democratic change have proven insufficient to the extraordinary problems of the time. Politicians and their entrenched financial sponsors have perfected a parallel fantasy world where CEOs tell governments what to do.

This Occupy “movement of the people,” though started without a designed plan, represents possibly the most obvious call to systemic action we have seen in our lifetimes. Without presenting the media fodder of demands or talking points, a clear and common vision for creating a responsible political and economic system has taken shape.

For November 2011, DwD invited the emerging and expanding Occupy movement with global and local citizens to a dialogue on the future of responsive democratic governance. The call was to help frame the emerging democratic engagement, not as activism or problem solving, but as visioning and caring for a shared future.

(Video) Presenting the purposes of Occupy as visions for the long-term expression of the values, goals, and actions of the movement. (Below) Collaboratively constructing a field of purposes in a hierarchy from personal to the transcendent. 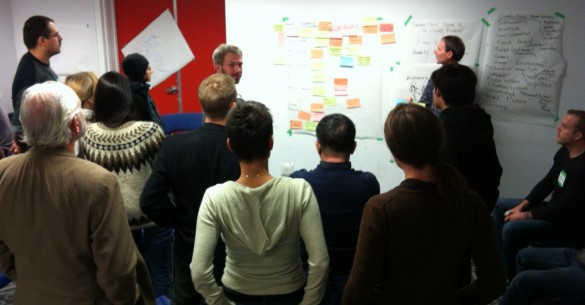 The purpose of this session was inspired by George Lakoff’s call for the Occupy movement to clarify its purpose through its shared morality:

“If the movement is to frame itself, it should be on the basis of its moral focus, not a particular agenda or list of policy demands…”

In a series of 4 fast cycles (circle, cafe, purpose tree, and circle) we explored the shared territory of several questions: 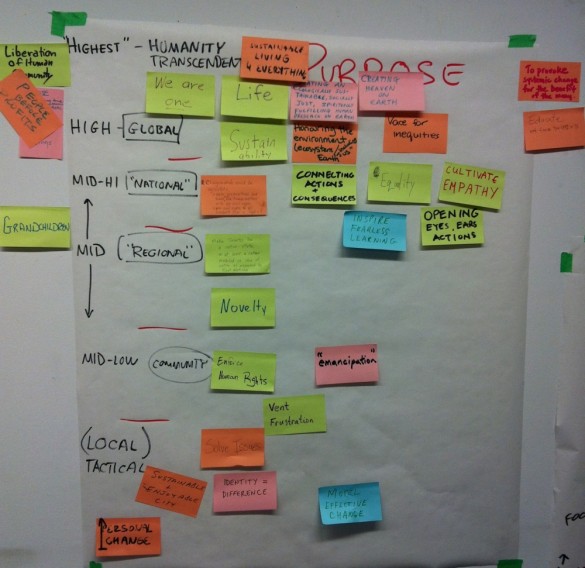